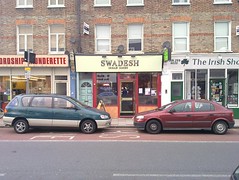 Indian restaurant and takeaway on Lordship Lane in East Dulwich, previously known as The Coriander.

As of September 2009 they have a buffet on Saturdays (noon-5pm) and Sundays (12.30pm-10pm). They do more interesting food than the standard X in Y sauce. Items on the menu include the South Indian dish chicken 65 and fish hara masala (Bangladeshi fish cubes). They do online ordering via Just Eat and via Hungry House.

secretlondon ordered one weekday evening in September 2009 from Just Eat. I had Swadesh treat for two (£6) which was a selection of achari chicken, kasoori kebab, lamb boti kebab, onion bhaji, and aloo bora. For a main I had shatkora gosth — lamb with Bangladeshi citrus fruit. I also had lemon rice and a stuffed naan. They gave me a small portion of sukmi kumbi (button mushrooms) for free together with poppadoms, mint sauce, and a bag of salad.

secretlondon's verdict: The food was interesting and I'd like to try the rest of the menu. The buffet may be worth doing as they really don't have a lot of curry house dross on their menu.