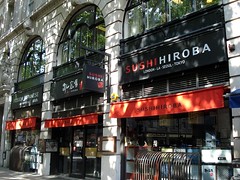 Conveyor belt sushi place on Kingsway in Holborn. It's actually Korean-run, rather than Japanese.

Kake and doop visited on a Thursday evening in April 2008. The food wasn't precisely awful, but on the strength of this visit Kake at least wouldn't hurry back. The tobiko gunkanmaki (flying fish eggs in battleship-style sushi) was the only thing that actually tasted wrong; the tobiko was rather acrid-tasting, and definitely unpleasant. I ate one piece and left the other - and note that the staff didn't bother asking if there was anything wrong with it when they came to clear our dishes. Everything else was just a bit "meh". The pieces of fish on the nigiri and particularly the sashimi were too big to eat comfortably. Nothing was delicious. The soju (Korean sake, £12/350ml bottle) was pretty rough too. On the positive side, they were happy to bring us tap water. We ended up paying £18/head exclusive of alcohol, for a total of 12 plates.

Kerry and Ewan visited on a Friday night in March 2011. It was medium quality and medium value; perfectly enjoyable for a pre-theatre dinner (which ours was) but not a place to make a special trip to. We ordered from a table rather than opting for the conveyor belt, and the food arrived promptly and at the correct temperature. The staff were friendly, although it did take some time to get their attention even though the restaurant was not particularly busy. I agree that the sashimi was unwieldy. The fried octopus balls were a bit disappointing, as they were more bready filler than octopus, but the tempura vegetables were excellent. I would stop by again if I were in the neighborhood and looking for a place to have dinner, but wouldn't go out of my way to eat here again.

bob visited for lunch in May 2013 and had set lunch A (£14) photo which also came with miso soup photo. The sushi and sashimi were fine. The vegetable tempura was pretty good. Green tea was £1.95 and my cup was refilled several times.

Note that a couple of the reviews linked below are quite keen on the "al bap" dish, which is something like Korean bibimbap, and sounds worth a try — you order it from the menu, don't expect to see it on the conveyor belt.