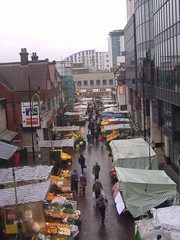 Surrey Street Market, one of London's traditional street markets, is held every day except Sundays, on Surrey Street in Croydon. It's a general market, regulated by the local council.

The first royal charter for a market in Croydon was granted by Edward I in 1276, and Croydon has had at least one form of market ever since. Surrey Street itself came into existence in 1830, and its general market after 1874, when the previous general market (on the Butter Market site) closed down. Originally a Saturday-evening event, in 1922 the council approved six-day opening, Monday-Saturday. (More historical info here.)

About half of the stalls sell fruit, vegetables, or both. Some of these focus on only four or five varieties, selling large quantities of each at low prices. Often everything on the stall is £1 for a given quantity; a couple of examples collected by Kake in April 2005 were 25 oranges, 10 lemons, 30 small red onions, or 6 sweet potatoes. These are incredibly cheap prices; the flipside is that when you come back next week the stall will likely be selling something completely different.

Other produce stalls have a more consistent and larger variety of stock. One of the largest specialises in Asian vegetables, fresh herbs, fresh chillies, and so on. Others concentrate on more traditional British produce such as carrots, swedes, potatoes, various greens, rhubarb, and parsnips.

A note on stall etiquette: whereas at some stalls the correct procedure is to select your own produce from the display, at others the vegetables neatly laid out at the front of the stall are for advertising purposes only, and you should go to the stallholder at the back and ask for what you want. Usually the "don't mess with my display" types document this with a big notice, but occasionally they don't. In general, if the display looks particularly neat and the stallholder is serving people from the back of the stall rather than the front, you should probably queue up and ask for assistance rather than just grabbing.

Other than the produce stalls, the market has a few cooked-food stalls (as of February 2008, both Caribbean food and Chinese food are on offer from the regulars) and a recently-arrived donut stall. Finally, around a quarter to a third of the market is made of up stalls selling things like shoes, batteries, household goods, cheap toys, bags, mobile phone accessories, plants, and cut flowers. Not all of these stalls will be present every day.

This is neither a farmers' market nor a speciality food market like Borough Market. It's simply a great, cheap way to buy a large variety of interesting and very fresh produce in an open-air environment with a lot of character, and in Kake's opinion one of the best things about living in Croydon.