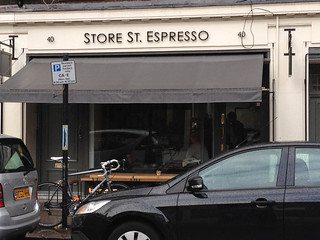 Coffee shop on Store Street in Bloomsbury. It is close to Senate House and the College of Law and has a university and hipster atmosphere.

secretlondon visited one weekday afternoon in April 2012. It's an independent coffee shop that highlights the origin of the coffee it is serving. As well as all the expected coffee shop drinks it serves sandwiches and cakes, and the sandwiches at least appeared to be made on the premises.

There are a few bar stools, and a table at the front of the shop. Otherwise most seating is on long canteen style wooden tables. These came with jars of tap water. I had a flat white with an extra shot of espresso (3 shots rather than the 2 it comes with). I think this was a mistake as I found it too bitter. Next time I will have it normal strength.

There was background music and toilets.