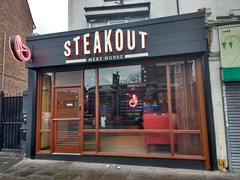 Halal steak restaurant in Norbury, part of a small chain.

It seats around 48 people at a combination of freestanding tables/chairs and banquettes. The decor is very pink and neon photo, and one of the walls has a display of toy cows photo.

bob visited for lunch on New Year's Day 2017. There were no other customers when I arrived around noon, but two came in while I was there and another four arrived just as I was leaving. Music was playing, just about OK in terms of noise level.

A starter of spicy mutton chops (£9) photo came on a bed of onions on a sizzling plate. The chops were well marinated and tasty, and I certainly felt the need to suck all the meat and marinade off the bones.

For my main, I had a 200g sirloin steak cooked blue with hot and spicy sauce (£17 including the sauce and a side of chips). The steak came on a sizzling plate with onions underneath photo. The onions were nicely caramelised after a while on the sizzling plate. I had the steak cooked blue, and the member of staff warned me to take the steak off the sizzling plate quickly if I wanted it to stay blue. The steak was tender, and the hot and spicy sauce had a good kick. The chips photo were large and crispy enough, and did taste of potatoes. There was a bottle of fresh tomato and chili salsa on each table, which made a change from ketchup and again had a real chilli kick.

Pineapple and coconut juice (£1.95) tasted mostly of pineapple with a hint of coconut.

The bill photo arrived without me asking for it, along with chocolates and toothpicks. No service charge was added.

Accessibility: A step to get in, and another step to the toilets.