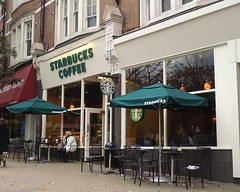 A branch of the ubiquitous coffee shop chain on South End Road in Hampstead, close to Hampstead Heath station.

It's double-fronted, and so larger inside than many other such branches. There's a sunken area at the back with some oddly-arranged arm chairs, some without tables so you have no choice but to lean over people to rest your drink. When [Adam S]? visited in late 2008, the lighting in this area was along the usual Starbucks vein of bordering-on-difficult-to-read levels of dimness. There are plenty of other tables in the rest of the space, though, and more sofas next to the windows which are better lit. There are about five or six tables outside, too.

The staff were very friendly and helpful (with directions) and the coffee was as good as Starbucks ever is with the usual array of hot and cold espresso-based drinks as well as juice blends and very nice Tazo teas. The prices, as you'd expect, are fairly steep but you are able to customise your drink. When I went in at around 2pm on a Tuesday it was fairly empty at the desk but with plenty of people sitting around.