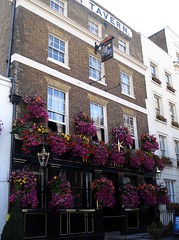 There's no TV and no piped music, which makes it a good place to actually talk to people. It has an upstairs room, whose purpose has varied over the years, but according to the pub's website as of February 2018 it is once again a bookable function room. Tables downstairs in the pub can also be booked, with advance selection of food requested for parties of more than ten people.

On John's Friday afternoon visit in July 2008, it was pretty much empty at 4pm (fewer than 10 customers), although it was a bit busier by 6pm; on a second July 2008 visit on a particularly warm Thursday evening, it was very busy at 6:30pm, but by 7pm there were a few empty tables and by 9pm it was pretty quiet. When bob et al. visited on a Wednesday evening in May 2013 it was quiet throughout the evening from when we arrived about 6:15pm. On a Sunday lunchtime in February 2018, it was unsurprisingly quiet at the 12pm opening time, but became moderately busy between 1-2pm.

Beers available on Kake's August 2008 visit were the usual Fuller's quartet (London Pride, ESB, Discovery, Chiswick) and a guest ale, Ossett Pale Gold (£3.05/pint); both Discovery and Pale Gold were well-kept, as one would expect from this place. In February 2018, they again had four Fuller's beers on: London Pride (£4.35/pint), Front Row, ESB, and Oliver's Island; Adnam's Mosaic was marked as "coming soon".

In February 2018, bob's bacon chop (£12.50) photo was tasty but the eggs weren't runny, which was disappointing. The roast beef Sunday lunch was good, with a good selection of vegetables including cauliflower cheese, beetroot and turnip. Robbie's burger was fine, if not outstanding. Fish and chips was good, although the chips were a little soft. It was noted that the Sunday menu on offer photo was different to that on the pub's website.

Kake, bob, Martin, elvum, Richard, and Robbie's collective verdict: We've been coming here for years and the beer is always excellent. The food isn't as cheap as it used to be, but the prices still aren't too bad given the area.

Accessibility: Belgrave Mews West is cobbled throughout, with no smooth surfaces. There are two or three steps up into the pub. The gents' is on the same level as the rest of the pub, but the ladies' involves several steps (and is rather cramped). As of February 2018, the pub was described as "wheelchair accessible" on its website, though it's not clear what this means.