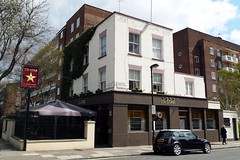 According to the 2009 Good Beer Guide, it has a heated smoking area at the front.

bob and Martin visited on a Saturday afternoon in July 2010. There were only a few customers in. A round consisting of a Deuchar's IPA and a London Pride came to £5.90. They were both pretty good.

Accessibility info: Small step to get in. It's then level to the toilets.