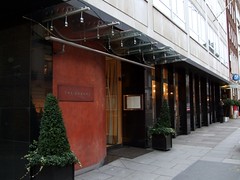 Note: According to Eater London, The Square was closed down by administrators in late January 2020. It's not clear when or whether it will reopen.

Entering this restaurant, there is a small lobby area, partially screened from the dining room, where several large chairs are arranged for people to wait if their table is being prepared. The bar area is just behind, where the service staff gather to observe the room and where bar staff prepare the drinks orders. Entering the main space, it is tastefully decorated as one might expect; screens cover the lower half of the street-facing windows to give a greater feeling of intimacy. Tables are laid out with white linen, glasses and cutlery, with some striking Russian futurist-style plates for decoration (these are removed after ordering). Tables are close to one another, but not uncomfortably so, and certainly not such that you can overhear others' conversations; it is not a noisy room, despite being fairly open and square in shape.

Ewan and a friend visited at lunchtime in December 2008, very close to Christmas. There was some mix-up with our booking (they had booked us for January rather than December by mistake, it later transpired after they'd checked their records), but in the meantime the maître-d' was very accommodating and apologetic, and offered a free glass of champagne while we waited for a table to become available (this took around 15 minutes). This champagne, a rosé, was needless to say, extremely good, and we were never made to feel unwelcome (beyond a brief initial frostiness when the confusion came to light).

We were able to look at the menus while waiting, of which the main folder was the à la carte (three courses for £75), with inserts for the tasting menu (£95 per person, £150 with wine, for the whole table only) and the special three-course Christmas lunch menu (£47.50, which is the menu we ordered from), which had a couple of options for each course. For Ewan, additional inserts included the vegetarian/vegan options (three available for each course), as well as a separate vegetarian tasting menu if desired. There was no lunchtime set menu as advertised on the website (three courses for £35), as this appeared to be replaced by the Christmas menu. The only difference for dinner is the absence of a set menu option; prices remain the same.

Once seated, service was as studiedly courteous as one might expect. Waiters were largely French, which made sense given the French cuisine on offer. The wine list is an enormous folder of around 80 pages, arranged into whites, reds, sparkling and fortified wines, and within that by region, which doesn't make any concession to novices beyond a page at the front for wines available by the glass. However, the sommelier was able to recommend an extremely fine medium-bodied red which was within our budget (Moulin a Vent 2005, £36/bottle). The cheapest bottles are around £30, though I suspect there's very little chance of selecting badly.

Two platters of butter were placed on the table (one salted, the other not, though cutely shaped into a Christmas tree-like cone), and a range of bread offered. The raisin bread was warm and lovely, though there was also a crusty white ficelle-shaped bread, and one wholemeal. Bread was offered again after our amuse-bouche.

The amuse-bouche was a delicate chestnut velouté (like a thin soup, beautifully flavoured) presented in a small eggshell cup, alongside which was placed what they referred to as a sage and onion 'frazzle' (a pastry-like thing resembling a strip of bacon) and a truffled pumpkin cone.

Following this came the first course, not so much a 'starter', as all three courses were of a similar size. In fact, my friend's foie gras with spiced pear & grape chutney and sourdough toast, was the most substantial of the meal. The foie gras was served in a separate glass container with a hinged lid. Ewan's choice was chestnut gnocchi with a mushroom sauce and mushrooms laid over the top along with some crispy shallots, all of it lovely. (I'm afraid I can't be more specific with the names of the vegetarian options, as I didn't get a photo of these and my memory isn't good for names.)

The second course was a fillet of cod with cauliflower puree, chanterelles and truffled Vacherin croquettes for my friend, and got some enthusiastic praise, with the fish perfectly cooked. The accompaniments to this dish (the croquettes, chanterelle mushrooms and puree) formed the basis of the vegetarian option as well, without seeming at all insubstantial. (Another vegetarian option was a dish with Alban white truffles that involved a £40 surplus.)

For the pudding, we both chose the tarte fine of pears with mulled wine ice cream. The tarte itself was a gorgeous, thin, flaky pastry dish, and though the ice cream would have been a little disappointing on its own, it complemented the tarte well. We perhaps rued not choosing the cheeseboard (£5 surplus) when we saw it being wheeled out to the other diners, though noticing our looks, one of the waiters was happy to offer us a taste of whatever we might like from it, with no extra charge, so we tried one of the more interesting looking ones, whose name alas I cannot recall.

Before the bill came, we were offered a fresh clementine, as well as one of their seasonal mince pies.

Verdict: All of the food was of a standard substantially higher than Ewan has had in the past, even at other Michelin-starred restaurants doing European food, and he would happily return to try the tasting menu. Once he'd saved up for it, that is.