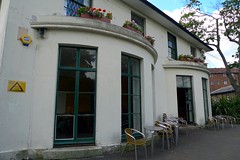 Ewan visited for breakfast on a Saturday morning, and got the vegetarian option photo, which came with the usual ingredients (baked beans, a sunny side-up fried egg, mushrooms and some rather blackened grilled tomatoes) along with vegetarian sausages trying to emulate the real thing, all quality ingredients, mostly (apart from those burnt tomatoes) well-cooked, and filling. Jo's healthier breakfast photo still managed to find a place for halloumi and bread, alongside its cucumber, peppers and hummous, but it was pretty decent.