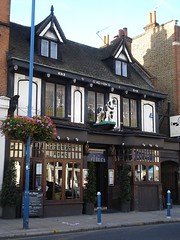 Young's pub on Putney High Street, one of their gastroified makeovers.

Entry is into a fairly spacious bar area. Further back is a space with bookcases and banquettes photo leading on to a dining area ready-set with wine glasses and finally a semi-open kitchen.

On Kake's Friday afternoon visit in October 2008 there were quite a few people in, but it was no trouble finding a table. The clientele were noticeably posher than at the Whistle and Flute down the road. Quiet piped music was playing (jazz, the peaceful noodly instrumental kind with occasional vocals). When Kake and bob visited again on a Monday lunchtime in June 2013, it was fairly empty at 12:15pm aside from two or three other customers. Music was playing again.

In October 2008, Kake tried a dish from the lunch menu: "smoked salmon served with scrambled egg and brown toast" (£5) photo. The salmon was cut into small pieces and mixed in with the eggs, which wasn't what I was expecting, but it was fine. The eggs were cooked quite dry, but thankfully didn't seem to have been bulked out with milk. Toast was cut quite thick and toasted very lightly on one side only. It came with a lemon half which seemed to have been grilled at some point but was sensibly served at room temperature.

In June 2013, Kake and bob shared a sausage roll (£3.25) photo from the bar snacks menu. It was a good size, served warm, and came with a free bowl of pickled onions. A nicely-hot mustard was provided on request. The sausage roll itself was a bit bland-tasting, though, and the pastry seemed to have suffered from reheating. The pickled onions were also too sweet for Kake's taste.

Free wifi is available via The Cloud. According to a sign seen in June 2013, there's a pub quiz every Wednesday from 8pm.

Accessibility: One step to get in, and regular toilets are in the basement, down a flight of stairs with no bends and a sturdy handrail on one side. There's an accessible toilet with a RADAR lock on the ground floor.