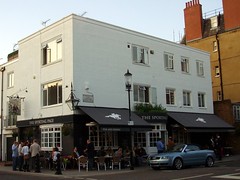 Pub in Chelsea, just off Fulham Road near the Chelsea and Westminster Hospital.

Although there's long been a pub on this site, the building is of relatively recent provenance (the 1970s) but attractively painted and with a comfortable traditional pub feeling inside. There are plenty of wooden fittings and fixtures in what appears to be a single, elongated room.

It's certainly popular on weekends, and on the day Ewan visited was filled with Chelsea football fans getting ready to watch the game, though the atmosphere wasn't in any way unpleasant or threatening.

There are six handpulls at the bar, offering Truman's Runner, Sambrook's Pumphouse and Junction, as well as Doom Bar, and Old Rosie cider, with one unused on Ewan's September 2014 visit. There's also a range of keg taps offering many of the usual suspects, as well as Camden Town Hells and Gentleman's Wit, and Truman's Pale Ale.

According to their website as of September 2014, food is served noon-3pm and 5pm-10pm Monday to Friday, and noon-9pm on Saturday and Sunday.

According to the 2015 Good Beer Guide, it's part of the Food And Fuel chain, and quiz night is Sunday.