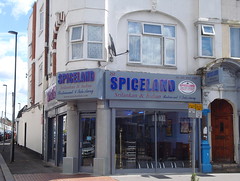 Sri Lankan/South Indian restaurant in Croydon. They also do takeaway and delivery.

Note: Spiceland was damaged by a kitchen fire in August 2020; we're not yet sure what this means for its continued existence. The information below was gathered before the fire.

It's fairly cafe-like in style; the tables bear no tablecloths, not even paper ones, and water jugs and condiment selections are set out in readiness. They're fully licensed, and have a fridge containing bottles of Lion Stout, among other things. A glass-fronted counter displays various deep-fried starters, which are microwaved on demand.

Kake and bob have visited and had takeaway from here several times now, most recently in March 2018. bob first popped in on a couple of Saturday afternoons in January 2011, not to eat in, but to get several starters to take away. Mutton rolls (70p each), fish and egg rolls (75p each), masala vadai (40p each), fish patties, and samosas (65p each) were all very good. On one of these visits the display counter was just running out of mutton rolls, but a fresh tray appeared from the kitchen within five minutes.

Kake, bob, and Alice visited again on a Friday evening in January 2012, this time to eat in. Mutton rolls and fish and egg rolls photo were again good, and didn't suffer too much from the reheating process. Devilled chicken photo was flavourful and not too dry. Aubergine curry photo was a little too bitter to be really pleasant. Prawn pittu kotthu photo featured pleasingly large prawns, cooked to an almost meaty texture. Mutton curry photo was quite spicy in comparison to the other dishes we'd ordered. (They offer a choice of spice levels; we went for medium.)

Service was a little unpolished, but this is really more of a cafe than a restaurant, so we weren't too bothered by this. Even when they served us a bottle of Lion Stout that had been overchilled to the point where it froze into a slush, they replaced it quickly enough that it was more amusing than annoying. They also kindly pointed out that our initial request for two portions of rice would be too much along with everything else (and they were right).

On a June 2014 visit, devilled squid (£6.45) photo was excellent, with beautifully tender squid. Devilled king prawns (£7) photo were also good; tender but not undercooked. A cup of masala tea (£1) was nicely spiced and not too sweet.

In July 2017, Kake's breakfast of idli with sambar and chutneys (£4) photo was pretty good. The idli had a properly sour flavour, though were a little too dense and doughy in the centre. The sambar was well seasoned and had a good selection of vegetables, and the chutneys were nicely savoury and all had distinct flavours.

Kake and bob's takeaway in March 2018 included some very good fish cutlets (£1.50 for three), crisp on the outside and soft on the inside. We also tried the neththali string hoppers (£5) for the first time; thin vermicelli noodles tangled around crisp-fried dried anchovies and studded with chillies. Egg hopper (£1.65) had a lovely sour flavour, crisp edges, a soft centre, and a creamy-yolked egg.

Accessibility: A step to get in, but it's all on one level once you're in. The ladies' doubles as an accessible toilet; a large cubicle with grab bars (though on our January 2012 visit there was a cleaning cart stored in there, taking up much of the room).