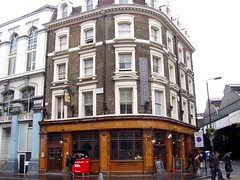 Reliably has real beer, a decent lager (currently Franziskaner), a couple of Belgian beers on tap (Belle-Vue Kriek, Fruli, etc), lots of bottled beer and a few types of bottled cider (Aspalls and other more real ciders as well as Magners). They also have a few different wines by the glass and bottle. The ale is variable but has recently (2007) been good. On a visit in October 2008, two of the four handpulls were on, offering Spitfire and London Pride (with a clip for St Austell Tribute turned around). Prices are quite high, with most things coming in above £3 per pint/bottle/whatever.

The downstairs has fantastic cubbyholes and is called the Debtors' Cellar — the cubbies were once (according to stories) debtors prisons that the families of inmates could thrown money down into to allow them to buy their way out.

Usually very crowded immediately post-work; gets a bit less busy later on. Does good, normally big food (although no sausage and mash last time, which they used to be known for) all week and okay roast dinners at the weekends.

There's a weekly pub quiz in the cellar on Tuesdays that it's wise to book a table for - £2 entry, winner takes all.