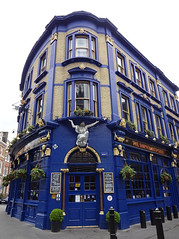 A slightly scruffy but not unpleasant pub near London Bridge.

There's a small amount of seating outside, as long as you don't mind the traffic on Tooley Street. It also has a function room upstairs, according to a sign seen outside in November 2007. There's plenty of seating downstairs, around a large central island bar. However, on a Friday evening after work it gets predictably busy and was difficult even to approach the bar let alone get a table.

Food is served noon-3pm and 5pm-9pm according to a blackboard seen outside in early 2007; don't know if this is every day, though (Kake saw it on a Tuesday). To add to the confusion, another sign spotted in August 2007 gave the food times as noon-2:30pm Monday to Friday, and noon-4pm Saturday and Sunday photo.

Accessibility: Small step to get in, most of the rest of the pub on the same level except the ladies' loos, which are up a flight of stairs with two bends and a handrail.