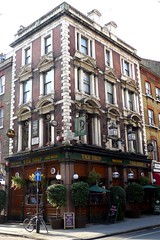 A nautically-themed pub in Fitzrovia.

Decor is as you'd expect, and involves a huge amount of brass, with all kinds of nautical fittings attached to the walls and ceiling. The space is cosy and carpeted, and there aren't a huge number of tables (maybe four or five small ones), with banquette seating on either side of the front door.

On a Thursday evening in October 2009, the pub got fairly full by around 6pm, and due to its central location and being not far from the BBC, there seemed to be a few radio people around.

There are three handpulls, at least one of which has always served well-kept Bass ale (£3.80/pint in Feb 2013) in Ewan's experience, joined by Doom Bar on visits in 2012 and 2013. There is also a range of the usual lagers.

Food is served 11:30am-3pm Monday to Friday, and is sourced from the cafe next door on Hanson Street. On Ewan's June 2011 visit, they also had a short menu sourced from Back to Basics cafe, just down the road. Ewan tried the German sausage from the latter menu (£6, served in a cardboard takeaway box), a single large sausage which comes with plenty of sauerkraut, mustard, and salad (celery, potato and, again, mustard). It was perfectly decent fare.

Signs advertise a bookable function room and restaurant upstairs photo, which is open at busy times. It has its own separate bar, though with no handpulls for ale. There are four or five tables around the edge of the carpeted room, with banquette seating and decor similar to the downstairs.