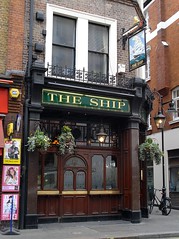 Fuller's pub in Soho. Described by someone on Beer in the Evening as "a great grotty rock pub".

Limited menu served at lunchtimes as of 2008; the pubs.com review linked below says food is available between noon and 2:30pm Monday-Saturday, but Greg is not sure how up to date this information is. Note that it's closed completely on Sundays.

On Ewan's April 2014 visit, the place still had much the same ambience as in earlier years, slightly shabby around the edges but catering well to its crowd of drinkers, with small tables packed in around the edges of the long, thin space, which is over two levels separated by a few steps in the middle of the room. There are five handpulls for ale on the bar, with Fuller's basic range (Pride, ESB and the like) as well as their standard keg and none of their more unusual bottled beers.

Greg's verdict: The Ship is one of the great pubs of London, it's got a rock/punk/goth staff that would no doubt hate my categorisations. But they share their attention to detail with the finest of CAMRA pubs, their beer is always great and their 'limited' lunches are delicious - nice fresh food, served quickly and tasting great.