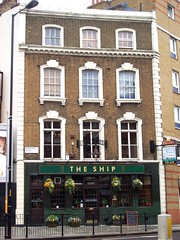 bob visited on a Tuesday evening in September 2013. Most of the tables were taken, but I managed to find one under a TV since everyone else was there to watch England play in the international football that night.

There were four real ales on, all from Fuller's: London Pride (£3.55/pint), Chiswick, Seafarers, and ESB. The Pride was mediocre.

According to the Ship website as of September 2013, food is served noon-3pm and 5pm-9pm Mon-Thu, noon-9pm Fri, and noon-8pm Sat-Sun. bob had scampi and chips (£8.75) photo from the specials board. The scampi were pretty good, but the chips were underdone and the peas were like bullets.

There is an upstairs function room and a beer garden. There were ample board games available, and there's a dartboard.

Accessibility: A step to get in. Once you're in, it's step-free to the bar, seating, and toilets, but there's a step up and over to the beer garden.