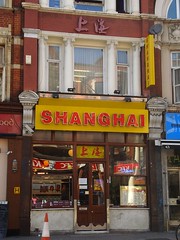 It's housed in the premises of an old eel and pie shop, and the front part still has the old-style decor, with wooden booths, a long counter (including a couple of stools to let you dine at the bar), ornate tiles, and lots of mirrors photo. There's a more conventional-style restaurant area out the back, with bigger tables and some nice stained-glass dome skylights.

They serve dim sum — as of April 2008 this was available noon-5pm with a "happy hour" of cheap dim sum between 3pm and 5pm every day; it may now be available in the evenings too, but we're not sure (and likewise not sure if they still do the happy hour). The menu lists about five different teas, including pu-er.

Kake has visited for dim sum several times now, most recently in December 2015. My first visit was on a Sunday afternoon in April 2008. Handily, I arrived just after the start of the dim sum happy hour. I was on my own, so was seated in a booth. The place was quite full; I saw one party of three being advised of a 20-minute wait for a table, though others arriving later were ushered straight in; not sure if they were bookings or just regulars. There did seem to be a lot of regulars coming in, many of them with children, greeted like old friends by the staff.

Har gao (steamed prawn dumplings) were perfectly decent. Xiao long bao (Shanghai-style pork/soup dumplings) were juicy enough, but I wouldn't exactly describe them as containing soup. Yam and chicken spring rolls were fine, and not too greasy, but the filling was a little bland for my taste. Service was fine. My total bill at happy hour prices, including a pot of tea (80p for the entire pot), was £6.50 (would have been £7.50 at normal prices). Even with the 70p service charge that they added on automatically, this is a real bargain.

Kake and Bec visited again for a vegetarian dim sum lunch on a Wednesday in April 2011. When we arrived at 1pm we were pretty much the only customers. We ordered one of everything marked vegetarian on the menu (six items, so a slightly smaller selection than at Shanghai Blues). These were all individually fine, but the selection as a whole was perhaps a little too much focused on fried dishes. This wouldn't be a problem for non-vegetarians who have access to the rest of the menu, but since this is the entire vegetarian range, it would be nice to have maybe one more steamed item.

The only vegetarian entirely-steamed item was the vegetable dumpling with carrot juice pastry (£2.80) photo; it was good, with a nice contrast of textures in the filling. Monk's vegetables cheung fun (£3.60), although technically steamed, didn't really provide a contrast to the fried items because they also had a deep-fried component inside (beancurd skin?). Mini golden pumpkin (£2.80) photo had a nice presentation and an interestingly chewy exterior. Yam croquettes (£2.80) were pleasingly non-greasy. Mooli croissant (i.e. crispy deep-fried turnip puff; £2.80) photo was a little too sweet for Kake's taste.

On this occasion, our final bill was £11/head for plenty of food, tea for both of us, and the auto-added 10% service charge. This is perfectly reasonable for London.

Kake's verdict: I'd definitely come back if I was in the area, certainly for dim sum, and probably to give the main menu a go too. I'd probably go to Shanghai Blues instead if I wanted an entirely vegetarian dim sum meal though.

As of April 2008, they advertise roast suckling pig from £11 for one portion to £120 for the whole thing (advance orders required).

Accessibility: A step to get in. Another step to get to the toilets, though they do have one toilet marked as accessible.