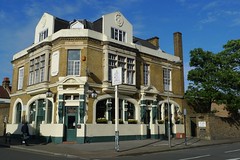 This is a large place with several rooms which has been refitted in a sensitive way, with plenty of wooden pews and tables. There are two large rooms inside, with the bar stretching between them, as well as smaller side room with couches and bookshelves which would seat about six to eight people. There's a sizable conservatory area at the end of the bar leading to a very large beer garden area, with plenty of tables for seating and popular in the warm summer evenings. The garden has a sign saying no children after 8:30pm.

The bar has three handpulls for ale, serving Tribute and Wandle on a May 2009 visit. They also have draught Staropramen, Hoegaarden, Addlestone's cider, and other familiars.

In 2009 the food was served noon-3pm and 5pm-10pm Monday to Thursday, and noon-10pm Friday to Sunday, and there was a special on burgers on Mondays (two burgers for £10). The menu itself covered the usuals but with some more interesting choices as well, and appears to change on a regular basis photo of menu in May 2009. We didn't sample the food on our visit, however. They also have plenty of bar snacks photo of bar snacks menu

They advertise a Thursday pub quiz, free entry. There is a board game night twice a month on a Monday (link). There is also a twice weekly Montessori music class for under 4s.

bob visited on a Thursday night in August 2010. There were several tables reserved one assumes for the pub quiz. They had Sambrook's Wandle and Junction on. The Junction was very drinkable. The menu is very gastro pubbyphoto,photo

secretlondon visited one Saturday in May 2016. There are now three handpumps with Sambrook's Junction, By The Horns' Stiff Upper Lip and Purity's Mad Goose on my visit. Pints were about £4. They had two meantime beers on keg, and some others I forget. The food is definitely gastro puppy (see menu and on my visit had started running two separate food ventures with a asado barbecue to be eaten in the garden. Mains were £12 ish. I had some food from the barbecue as we'd been admiring the suckling pig they were cooking. It was £12.50 and came on a board with corn tortillas, sweet potato and salad. The conservatory is nice and the garden lovely with picnic tables and grass.