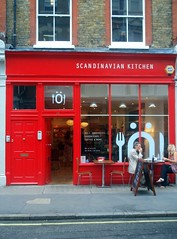 It's open from 8am on weekdays, so handy for breakfast (the LRB review linked below suggests that the breakfast platter is well worth trying). In spring 2010 they opened a new basement seating area, so there's now more eat-in space than there used to be.

The menu is based around a range of salads and open sandwiches which can be added to a platter, mostly involving fish as might be expected, though there are also a few vegetarian options. As of February 2011 a three-item platter is £5.25 (takeaway 30p cheaper) and a five-item platter £8.25 (takeaway 30p cheaper); their website recommends the three-item platter for a "normal" lunch and the five-item version if you're especially hungry. Portions are small but filling, which also holds for the pastries (though for cinnamon buns, head to Nordic Bakery: the ones here are sticky and warm, certainly, but rather smaller). They also do a range of flatbreads with food piled on top, and Ewan tried one with eggs, cucumber, tomato and lettuce with a dollop of mayonnaise photo for breakfast in November 2011, which was excellent (that and a cup of filter coffee came to £5).

Coffee is provided by the Monmouth Coffee Company, and in Ewan's opinion is excellent. It's also presented in lovely mugs; in general, design is a strong feature of the Scandinavian Kitchen. They also do big cups of filter coffee for a relatively low price.

Aside from the eat-in food, the shop stocks plenty of Scandinavian groceries including a wide range of herring products. Bakers may be interested to know that according to their April 2008 mailout, they stock ammonium carbonate, fresh yeast, and "several different kinds" of Scandinavian flour.

Comment added by Peter Bruce: I really like this place. The guys there are really nice, you always feel welcome. There are too many faceless cafes, this is not one of them. Recommended.