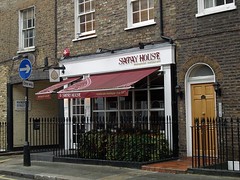 A Malaysian restaurant in Paddington, near Edgware Road.

Leon visited for lunch in early April 2008 with a friend who spends about half his time in Kuala Lumpur. It's quite a little restaurant — only a few tables on the ground floor (and the same in the basement too).

We were well received as it was fairly quiet (but it ended up busier towards 1pm). We ordered chicken curry (kari ayam), beef rendang (rendang daging), water convulvulus (kangkong belacan) and coconut rice (nasi kelapa). All were excellent, especially the beef rendang. The food came pretty quickly.

The bill came to just under £30, which is about ten times what you would have to pay in Kuala Lumpur, but about as expected for London. Overall a nice little restaurant and well worth trying out.