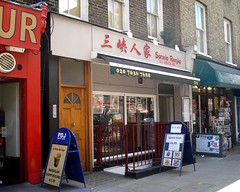 Small Chinese restaurant on Goodge Street in Fitzrovia, the new occupant of the premises most recently vacated by Miga. Its name is a direct transliteration of the Chinese: Sānxiá Rénjiā (三峽人家).

They have two menus, one with the familiar Anglicised dishes and another with regional Chinese specialities including Sichuan and Hunan food. When we first visited in June 2010, the latter menu was only available in Chinese, but as of March 2011 it's fully translated and even illustrated. They do Chinese hotpot/steamboat as well photo of ticksheet.

On Kake's weekday lunchtime visit in June 2010, there were only a couple of other customers in. Background music was playing, rather repetitive, but not too loud. Service was very friendly and helpful.

From the lunch menu, sea-spicy shredded pork with rice (魚香肉絲飯/yú xiāng ròu sī fàn; £6) wasn't bad at all, with plenty of chilli heat. The rice was good, not mushy in the slightest, and of the perfect texture for picking up with chopsticks (in my experience of Chinese restaurants in London, this is rarer than it should be). I also had a cold dish from the regional Chinese menu: tiger salad (老虎菜/lǎo hǔ cài; £6.50) photo. This was really rather good — a very spicy yet well-balanced salad of shredded green vegetables, chillies, fresh coriander, and thin, firm tofu strips.

Kake, Sarah, Ewan, and Alice paid another visit on a Monday evening in March 2011. There were a fair few people in, but no trouble finding us a table. We ordered from the regional Chinese menu, and our waitress was careful to make sure that we understood which dishes were served cold, and which were on the spicy side.

Jellyfish with shredded chicken (海蜇雞絲/hǎi xiān jī sī; £6.90) photo was good, as was shredded kelp (涼拌海帶絲/liáng bàn hǎi dài sī; £4.80) photo. Tiger salad (老虎菜/lǎo hǔ cài; £5.80) photo, now translated as "mixed vegetables (cold dish)", wasn't quite as good as on the previous visit, being a little too salty, though still the best Kake has had in London.

Mao's braised pork (毛家紅燒肉/máo jiā hóng shāo ròu; £9.80) photo was well-flavoured and had a nice balance of meat to fat. Ewan thought this was really very tasty. Deep fried beef with cumin (孜然牛肉/zī rá niú ròu; £9.80) photo had plenty of chilli heat; Kake was quite keen on this one.

Steamed rice was fine, as before. Their rice pricing is a little confusing; we ordered three portions of rice to share between the four of us, and received a communal portion that would have been enough for two people at most. We had to ask for rice bowls (they'd given us large flat plates instead), and were only brought three to start with. When we asked for more rice, the serving dish was refilled from a rice cooker at the side of the dining room. Our bill included "steamed rice x 3". Perhaps it's priced per person but refills are free?

They are licensed; we had a bottle of white wine (£15.80) which was fine. They also have KTV (karaoke) rooms if that's your thing.

Kake's verdict: I liked this place last time, and I liked it this time too. The atmosphere is quite basic, but the food is good and the central location is convenient. Portions of some of the dishes are perhaps a little smaller than elsewhere, but not to the point of being a rip-off.

Accessibility: A shallow step up to get in. Toilets are down a flight of stairs in the basement.