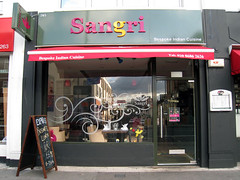 Sangri is a recently opened (as of October 2008) restaurant offering what they term bespoke Indian cuisine in south central Croydon. Externally it resembles a smart, modern restaurant with a few elephants and flowers about the place to give it a more Indian feel. Piped Indian music (of the fairly standard Indian restaurant kind) adds to this atmosphere.

Robbie and Shuri visited on a Tuesday lunchtime in October 2008 to try the "Express Business Lunch" offer, which was advertised as four courses for £7 per head. What you get is a starter (choice of three), a curry (choice of vegetable, chicken, lamb, or prawn) of one of half a dozen standard types, a side dish, and a sundry.

When the starters arrived (chicken tikka and a potato pakora) they looked a bit nouvelle cuisine in the portion size department. The chicken tikka consisted of two pieces of chicken, an artfully arranged side salad and the de rigeur drizzle of something on the plate; it turned out to be juicy, perfectly cooked chicken well marinaded in tasty spices. The pakora was also nicely flavoured but equally small. The starters were followed swiftly by the rest of the food: express appears to mean "comes all at once".

Chicken madras was just the right heat level with a nice mix of spices and other flavours making it tastier than the average. The vegetable korma was made with courgette, aubergine, cauliflower, broccoli and celery, and was coconutty and nicely spiced. Butternut squash as a side was also nicely flavoured and met with approval. The only disappointment was the rather bog standard onion bhaji - ok, but not up to the standard set by the rest of the meal.

Soft drinks of various kinds were around the £2.50 mark, with a rather tasty mango lassi coming in at £3.95. Overall, it came to a shade over £10 per head plus service.

Portion size wasn't a concern in the end - Robbie was comfortably full afterwards and Shuri was defeated. The curry dishes must have had TARDIS-like properties.

The business lunch offer runs from noon until 2:30pm and is well worth a look in though.

Robbie and Shuri visited again with some relatives in tow to sample the evening menu. There was a wide range of starters, including some garlic mushrooms in a very tasty sauce, curried crab cakes and a range of specialties of the house. Prices were between about £5 and £9 for starters, with some scallops being the most expensive item. Main courses offered the usual range of Indian curries, as well as a selection of specialty items including things like swordfish and halibut which sounded interesting. We tried an 'Akari', from the vegetarian menu which consisted of very nicely cooked vegetables in a lime-heavy curry sauce. Murgi Angara with chicken and Garlic Chilli Chicken both offered very flavourful sauces with lots of spices and perfectly cooked meat. A Lamb Passanda was also very well done, demonstrating that their milder sauces are no less flavourful than the hot ones. Curries ranged from around the £6 mark to around £15 for the more expensive fish dishes.

Naan breads were some of the best we've come across- fresh, tasty and just slightly crisp on the outside. Prices for rice and sundries were reasonable too. Drinks included some nice, long cocktails for about £4 each, Indian beers and a decent looking wine list. Non-alcoholic cocktails were also offered, as well as a selection of fruit juice and soft drinks. Prices for rice and sundries were pretty much par for the course.

Service was excellent, polite and attentive. The only minor criticism is that the kitchen can be a little slow getting the food out, but when it arrived it was definitely worth waiting for. Overall, an excellent Indian meal and well worth a visit for anybody in the area.