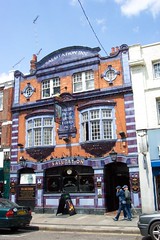 Fuller's pub on King Street in Hammersmith, opposite the Town Hall. Many of the Council staff drink here. It's in the Good Beer Guide and it's a Grade II listed building.

It's nice and spacious, though we're not sure how crowded it gets on the weekends. Seating is high-backed benches as well as chairs, and even a small sofa or two. There are plenty of large screens around the place showing sport, but not too loudly. Tiled conservatory out the back, quite pretty, with plenty of seating. There's a beer garden too, accessed via the conservatory.

They generally have three or four of the Fuller's ales on; in August 2009 they had London Pride (£2.90/pint), ESB, and Discovery.

Food is served noon-3pm and 5:30pm-9:30pm Monday to Friday, and noon-9pm Saturday and Sunday. As well as the usual pub standbys they also offer a selection of home-baked pizzas, pastas and "baked foccaccia sandwiches". In January 2008, bob tried the scampi and chips, which was £6.25 photo. Photos of the menu as of January 2008 are here and here.

Kake's verdict: This is my default pub for meeting people in Hammersmith. It's easy enough to find, the ale is fine, I've never had a problem finding a table on a weekday evening, and it's handy for the King Street restaurants. I'd be unlikely to spend the evening here though.

Accessibility: One step up to get in; once you're inside there's level access to the bar, seating area, and toilets.