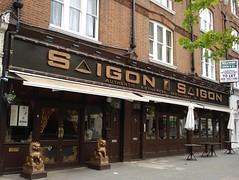 Kake and bob visited on a Thursday evening in July 2008. We hadn't booked, but there was no problem finding us a table in one of the two largish dining rooms, both of which had their fronts opened up to the street thanks to the lovely weather.

We started with fresh salad rolls (£5.50) and fried battered spicy squid (£6.50) photo. The salad rolls were fine; the fillings were indeed fresh, but the wrappers were a little tough in places. The squid passed the bob test, being nicely spicy and also well-cooked with no rubberiness.

For mains, we shared braised aubergine with salted fish (£6.50) photo and stewed pork in caramel sauce (£6.50) photo, along with steamed rice (£1.80) and fried noodles (£4.50) photo. Both aubergines and pork were cooked and flavoured very well. The rice was a little dry, but this is a minor quibble.

Because we had some wine (a decent Rioja, £18) left in our bottle, we had desserts. These were pre-made, and are best left unmentioned and indeed unordered.

bob visited again on a Friday lunchtime in April 2009. They do several set menus for lunch as well as the normal a la carte menu, and I went for one of these; beef pho and Vietnamese spring rolls for £7. They were both very tasty. I decided to risk a dessert, and it was much the same as last time. Organic Vietnamese tea was £1.75, and a 12.5% service charge was added to the bill.

bob visited yet again in June 2009. The lunch deals are no longer available. bob had bun bo hue (£6.95) which was very tasty and spiced quite nicely. Jack's dish of cold vermicelli with stir fried beef was tasty as well.

Kake's verdict: I definitely want to come back; I'd like to try their pho and their bun bo hue. I will try to avoid the momentary insanity that led me to order dessert though.