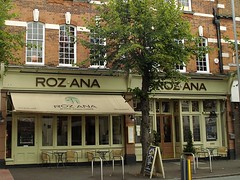 Although it's not an unusually large building, it's divided into three areas; a bar/lounge, a 30-seater brasserie/casual dining area photo, and a restaurant. The restaurant is on the first floor, and may not be open at quieter times. The main menu is available in all three areas, and there are also bar snacks available in the lounge.

The menu is reassuringly short, with no sign of the usual "X in Y sauce" curryhouse dishes. Although they do offer vindaloo and chicken tikka masala, these are in the form of vinha d'alhos, a savoury stew of slow-cooked pork belly, and chicken tikka Laphroiag masala, flambéed with single malt whisky. Fish, seafood, and vegetarian dishes feature no less prominently than meat.

Kake and bob visited for a late lunch on a Monday in August 2009. Arriving a little before 2pm, we were the only customers. Music was playing, though not loudly enough to really be noticeable.

Pre-lunch poppadoms (£2/person) arrived in a napkin-lined basket photo of a single portion. They were pretty good, very crisp and not greasy at all. The accompanying pickles and chutneys were also above average; a creamy, crunchy raita, a cumin-flecked mango chutney, a fresh-tasting green chilli salsa, and a rather unusual type of lime pickle (bob wonders if it had aubergine in it).

Kake decided to order from the "quick lunch" menu, which offered a main dish (seven choices, one vegetarian) plus rice and a drink (soft drink, wine, or beer) for £8. I chose the Goan prawn curry photo, which was described as tiger prawns served in a hot sweet and sour mangosteen and coconut sauce. This was pretty tasty; the prawns weren't overcooked, and the sauce had a nice hint of heat to it and wasn't too sweet. I would perhaps have liked a bit more amalgamation of flavour between the prawns and the sauce, but overall I enjoyed it.

bob chose the abovementioned pork belly vinha d'alhos (£12) photo. The pork was very tender and had a nice balance of meat and fat. The sauce wasn't excessively hot.

We also shared a side dish of spinach with garlic and dill (£4), which Kake felt could have done with either less cooking time, or some more substantial greens in with the spinach to provide texture. Basmati rice was fine. bob felt his Peshwari naan was a little too crispy for his liking.

Tap water was provided in a chilled swingtop bottle, which was swiftly replaced by a fresh one when we finished it. Service was very friendly.

Kake's verdict: I'd definitely come back if I was in the area.

Accessibility: One step up to get in to the lounge and brasserie areas. Level access to the pavement seating area only. Didn't check the toilets.