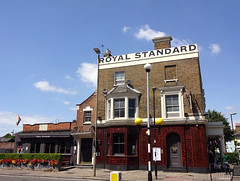 It was previously part of the Orchid Group, specifically their Do Drop Inns chain, but following Orchid's 2014 descent into administration it was bought by Mitchells & Butlers and added to their Castle sub-chain.

The walls are solid painted blocks of dark grey and dark orange above wood panelling. Seating is a mix of banquettes and mismatched wooden chairs flanking varnished wooden tables, while lighting is a mix of faux-vintage and faux-industrial. Pillars and waist-height wooden screens break up the space, and plastic shrubs sit in small metal buckets on the tables. There's some external seating out the front, as well as a small patio-style part-covered garden to one side.

Kake has visited twice now, most recently in July 2019. On a Saturday afternoon in September 2013 (under the old management) the handpumps were clipped for Cottage Brewing Phantom (£1.80/half), Theakstons Old Peculier, London Pride, Greene King IPA, and Courage Directors. There were only a few other customers in, and music was playing, perhaps a little louder than ideal. On a Thursday lunchtime in July 2019, the ales were Laine Mangolicious, St Austell Proper Job, Sharp's Doom Bar, and Hopback Summer Lightning; a pint of lime and soda was 70p. There were again only a few other customers in.

Food is served, apparently all day. In July 2019, Kake's aubergine and harissa burger (£11.50 including fries) photo was fine for what it was, though seemed to contain more chickpeas than aubergine. The fries were skin-on, and nicely hot and fresh.

Child-friendliness: They have at least four high chairs, but they're the type with no tray and very little back support. There are baby-changing facilities of some kind in the accessible toilet (not checked; this is going by the sign on the door).