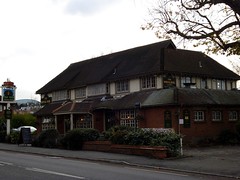 Separate bar side and lounge side. The lounge side is quite nice in a dark wood kind of way. The front part has some comfy chairs (sofa style), and the back part has a raised dining area with bare floorboards at front and carpet at back. There's a fairly large patio-style beer garden out the back of the pub, with a couple of space heaters.

Kake visited on a Wednesday lunchtime and sat in the lounge side. There were only a few people in, mostly in pairs. I had McMullen AK at £2.44/pint; they also had a couple of other McMullens available — including Saracen's Premium Bitter, which I don't think I've seen elsewhere, though I've only been in four McMullen pubs ever. Piped music was easy listening/MOR piped music, but quiet enough to mostly ignore; there was actually some vaguely decent stuff (e.g. Ticket To Ride) randomly mixed in too.

I ordered the roast vegetable and Wensleydale crumble (£9) photo; it was well-flavoured, with nice chunks of cheese and a well-seasoned sauce, but the parsnips and red onions were undercooked. (The other vegetables involved were potatoes and carrots, which were fine, albeit not very roasted). There was too much onion in both the crumble and the salad. I also found three actual parsnip peelings in amongst the other veg. Salad wasn't dressed properly — just a drizzle of over-sweet vinaigrette over the top — but then what pub salad ever is? At this price though, a bit more care wouldn't go amiss.

The 2008 Good Beer Guide says they have bar billards! Also that children are allowed until 9:30pm, and quiz night is Sunday. (Can't confirm the presence of bar billiards, since I was in the lounge side and it'd be in the bar side.)