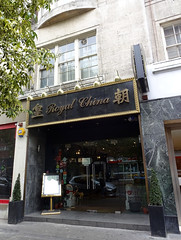 Chinese restaurant on Queensway in Bayswater, offering good dim sum. It's part of a small chain.

There's a decent enough waiting area just inside at the front, and it's pretty nice inside; lots of mirrors, including mirrored pillars around the edges to provide relative privacy without pokiness. They have nice circular tables with lazy Susans in the middle to make it easy to share dishes. Some of the tables are suitable for large groups; we had ten people sat comfortably at ours.

Kake, Nick and various Perl mongers visited on a Thursday lunchtime in November 2007. Tthere was no trouble seating us when we arrived around 1pm. Highlights of the menu included the roast pork puffs (£2.40), gorgeously flaky and light pastry with no cloying lardiness; and the steamed prawn and chive dumplings (£2.85). Teapots were refilled promptly. They didn't offer us a choice of tea, but apparently there is one, so it might be worth asking. The jasmine tea we were given by default was pretty good though.

As of October 2016, dim sum is served noon-5pm Mon-Sat and 11am-5pm Sun. Bookings for dim sum used to be taken Mon-Fri only (not Bank Holidays); we're not sure if this is still the case.