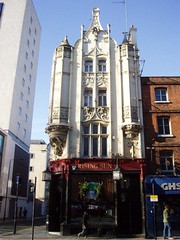 A nice enough pub with an entrance on Tottenham Court Road, and seating outside along a side street, which was quiet enough to sit at.

Nick and two friends visited about 10pm, after a meal at a restaurant. Of the 5 hand pumps, 1 had nothing on, 2 were out of service with yellow labels about cask conditioning, the Deuchar's IPA was off, but the London Pride was on and was fine. However, the evening was somewhat marred by the last impressions. The staff carefully tidied away all the tables and chairs around us, which we had no problem with. We took the hint, and started to drink up. We stood up to finish off, to help them get the job done, and at 23:17 standing outside the main door, I asked "please can I come in to use the toilet?". "No," said the bar staff, "we're closing", and stunned, I watched her shut and lock the door in front of me. Yes, it was a quiet Monday night and I appreciate that they want to go home. But if you treat your customers like that, they won't be your customers again.

Comment on the above from Kake: As discussed elsewhere, it's possible that the person who was closing up hadn't realised that you were actually customers.

Further comment on the above: Or maybe they thought you were going to pull out a gun and rob the place. Closing time when all the customers have gone is a favourite time to do a pub.

Comment added by Steve: Unbelievably camp barman and odd vibrations in the floor in the back, but usually quiet in the early evening. Guest beers are usually not particually exotic or unusual, but they do at least have them.