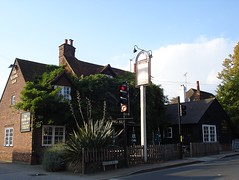 Pub in Mill Hill. It's on top of a hill and quite a trek from all public transport other than the 251 bus, but it does have a car park.

It has outdoor picnic bench seating front and back, a tiny front bar (standing only, apart from a couple of stools), a saloon bar with upright chairs and tables for dining (though just drinking is fine), and some snug-type seating off to one side. Note that although there's a door marked "Saloon" on the outside, it doesn't open (and as of September 2008 has a bench shoved against it inside) - entrance is via the front bar.

Kake visited on a Thursday early evening in September 2008. Beers available were Young's Bitter (£2.75/pint), Abbott Ale, and Adnams Bitter. The Young's was fine, and I had two pints of it.

Food served all day, according to a board outside, and I certainly managed to get some at 4:30pm. Duck spring rolls (£5) were a lot better than I was expecting; decent side salad and the spring rolls themselves were packed with meat and fried just right photo. I'd eat here again on the strength of this.

It was empty when I got here, but people started arriving around 5pm. I had a nice chat with one of the regulars, who started talking to me as we were the only people sitting in the saloon bar. There was no piped music.

Accessibility: I can't remember if there was a step to get in - but the toilets are outside, reached via the back beer garden, and I'm not sure you can get out there without steps.