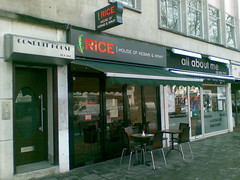 bob visited on a Wednesday lunchtime in February 2009 a week or so after the restaurant had opened. When I turned up there was one person eating already. Several groups turned up while I was eating and a few people got takeaway. The restaurant can seat just over 30 people.

To start with I had Kashke-o-Bademjan (£3) photo, an aubergine dish with walnut, onion, garlic and broiled yoghurt. This was very good, and the flavours were quite subtle.

For my main I had the house special (Makhsous) photo. This comes with a minced lamb kebab and then your choice of a chunk of fillet of lamb, or of boneless chicken breast (£11.50 with lamb or £8.50 with chicken). I had the fillet of lamb. The minced lamb kebab was very tasty indeed; again, the flavours were subtle. The fillet of lamb was pretty good as well, still pink in the middle. You can have this with rice, or nan with salad. I had the nan with salad. The salad was fresh and the dressing was pretty good too. The nan is freshly cooked, and the chilli sauce was suitably hot.

For dessert I had the Paloodeh (£3.50) photo which is Persian sorbet wth rice noodles in some rose water. This was interesting: the sorbet was pretty good, but I felt there was a bit too much rose water. The noodles were the strange bit. Nothing wrong with them just not what I expect in a dessert.

To drink I had a pot of Persian tea (£2.50) photo. This tasted quite nice and was kept on a warmer.

Verdict: The menu has lots of interesting things on it so bob is likely to make several return visits. They also do takeaways of everything.