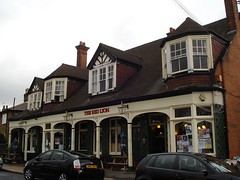 Initially appearing to simply be a backstreet locals' pub, there's more to the Red Lion than there may seem. It has its own stage, and the front windows of the pub are filled with posters advertising upcoming live music and other events. There are eight handpumps on the bar, offering varied and interesting real ales; on our September 2013 visit these were Ascot Ales Alligator, Ascot Ales Posh Pooch (£1.80/half), Black Paw Archbishop's Ale, Dawkins The Dog Delusion, Erasmus Blockbusting Golden Ale, New Plassey Dragons Breath, Twickenham Daisy Cutter, and Worsthorne Collier's Clog photo.

The interior is divided into several areas, though there are no doors between them. A door to the left of the frontage opens onto a cosy living-room-like area photo, which leads back into a room dominated by a stage area. There's a door to the back garden here, too, and the garden is worth a look, with grass and flowers and patio furniture, plus an entirely covered decking area with a sofa.

The space continues to wrap around the back of the bar through a pool room and then into the right-hand bar area, which has its own entrance plus a fruit machine, a flatscreen, leather banquette seating, and a squashy floral sofa situated directly beneath a dart board.

Kake visited on a Friday afternoon in September 2013. I was the only customer when I arrived, though a couple more turned up while I was there. A pub dog and cat were wandering around too.

Music videos from the '80s (Vintage TV) were playing on the flatscreen, with the sound on. Rick Astley, Rock The Casbah. Service was friendly, and when I asked about one of the ales I was given a generous taster.

According to a board seen outside in September 2013 photo, food is served noon-3pm and 6pm-9pm Tuesday-Saturday, and noon-4pm (roasts) on Sundays.

According to their website as of September 2013, quiz night is Thursday and they have live music several nights a week.

Kake's verdict: Liked it, would come back. Possibly even worth a special journey to Isleworth.

Accessibility: A steepish ramp and then a small step at the entrance doors. The doorways are a little narrow. Once you're in, it's step-free to the bar, pool table, toilets, and all the interior seating. However there's a large step to get into the garden, and there may be more steps out there too.