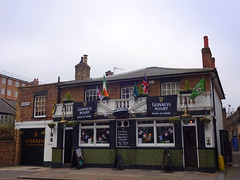 Incongruous but rather nice pub just across the road from Stamford Brook Station.

The bar is a single room, fronting on Goldhawk Road. Back-to-back pew seating lines the wall next to the front windows, with a long wooden table and mismatched chairs next to it. Dilapidated sofas further towards the back complete the furnishings. There's some kind of beer garden out the back, and ambient conversation on a visit in June 2008 suggested that they'd just installed some trees.

Kake has visited here several times over the years, partly because it's a good option for the area and partly because it's so convenient for the station. It's nicer in the afternoons than in the evenings; they start turning the music up around 6pm and it gets harder to have conversations after that. A shame, since the music is generally pretty decent (David Bowie, Eric Clapton, that sort of thing). Optimum time for the Raven seems to be around 5pm, when the early customers have started arriving but you can still hear yourself think. Service is generally friendly.

They have a few handpumps for real ale, though sometimes they're all off (most recently on Kake's July 2008 visit). When Kake and bob visited on a Tuesday afternoon in April 2009, there were three on; Theakston Paradise, Bombardier, and Deuchars IPA. They also do Scrumpy Jack cider rather than Strongbow, which is a nice change.

Accessibility: one step up to enter the pub; ladies' and gents' both on same level as main bar.