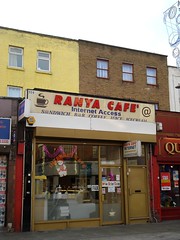 An internet cafe on Walworth Road.

As well as internet it does nice teas, coffees and light food including toasted sandwiches. The owners are Middle Eastern and it has recently advertised 'Shisha in the Garden' photo which made secretlondon go and investigate.

There were two shishas in use, and four more standing against a wall photo. One was next to a sofa and chair in one corner and the other was under a gazebo. The area was covered but open enough to presumably comply with anti-smoking legislation. There were a group of shisha hoses on one of the hanging basket brackets photo. The garden was paved but had plants and wooden chairs (with cushions) and wooden low tables. There was loud rap music coming from a stereo which was possibly owned by the young black and Asian crowd who were hanging out here.

secretlondon has always been happy with the quality of the food and drink here. With better music the garden could be chilled but it's probably too crowded to be anything other than a quick pit stop. Still recommended though.

secretlondon went here on Sunday afternoon for tea and cake. Her lemon tea was just a bag this time (no lemon) photo and the shisha in the garden was off due to "staffing difficulties" and Ramadan. There was no music in the garden which was quiet. On my last visit in October 2008 I got lemon tea with a lemon photo, a baked potato photo and some cheesecake photo. There was loud music inside which came from a television playing one of the music TV channels.

Comment added by secretlondon: I don't think this place does shisha any more.