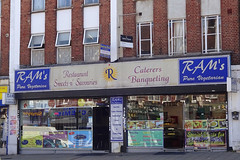 Totally-vegetarian Indian restaurant, sweet shop, and catering service in Kenton. According to their website, they are vegan-friendly and Jain-friendly. They also do takeaway and delivery, with online ordering via Hungry House and via Just Eat.

The restaurant seats around 60-70 people at melamine-topped tables for 4-6, each surrounded by tall-backed black pleather chairs. Decor is fairly plain, but enlivened by paintings of Ganesha on the walls and a fringe of blue fairy lights running down the centre of the ceiling. It seems to be licensed, as the small bar in the corner has a selection of spirits on optics.

Kake has visited twice now, once on a Thursday lunchtime in September 2016 and again on a Friday lunchtime in July 2017. There were no other customers when I arrived around 2pm on my first visit, but by the time I left there were half a dozen others in. On my second visit, around noon-1pm, there were again about half a dozen other customers. A Bollywood music video channel (B4U) was showing on a flatscreen with the sound on, not too loud.

I had their all-you-can-eat buffet (£6) both times. The buffet station wasn't enormously extensive — three hot dishes, three chutneys, salad, plain rice, and two desserts — but the food was well-executed, and the hot dishes were all distinct in flavour. Tap water was set out next to the buffet, ready-poured in metal cups and also in metal jugs for self-service top-ups.

In September 2016 photo of plate, the blackeye beans were lovely and tender, and certainly among the best I've ever had in terms of texture. Dal was also well-judged in texture, and subtly seasoned to allow the flavour of the lentils to come through. The third hot dish was a savoury combination of potato, cauliflower, cabbage, carrots, and peas; I'd been prepared for the peas to be overcooked, as they so often are, but these were just fine, still tender and juicy. In July 2017 photo of plate, the standout dish was probably the dal, though the other two hot dishes — a mashed vegetable curry and another that included sweetcorn — were also good.

Rice was fine both times, neither oversalted nor overcooked, with nicely distinct grains. The chutneys were also worth a mention, particularly the beautifully herby green one. The salad had too many large pieces of carrot in it for my taste, but this is just personal preference.

One of the big selling points of the buffet here is the inclusion of unlimited freshly-cooked puri photo. I was given three to start with, and reminded twice to ask for more if I wanted them. They were rich and flaky, and not overly greasy. I'm more of a rice person, but I can see bread-lovers being very happy with these.

Kake's verdict: I've been twice now and would definitely come back if I was in the area.

Child-friendliness: They have at least three Antilop-style highchairs. No obvious nappy-change facilities.

Accessibility: A step to get in on both sides. Two more steps to the toilets.