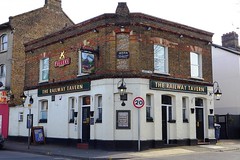 This is not one of Fuller's showier pubs; it's fairly small and has a traditional local vibe. There's a beer garden at the side with plenty of flowers on show and a somewhat astonishing water feature photo.

Kake and bob visited on a Monday evening in August 2011. The bar has two banks of three handpumps each, but both were showing the same three ales: London Pride, ESB, and Gales Seafarers. The Pride was in good condition.

According to the 2011 Good Beer Guide (and a sign seen outside in August 2011), food is served weekday lunchtimes only; however as of August 2011 the Fuller's website puts the food times as noon-2pm every day, including Saturday and Sunday. Previous editions of the GBG have mentioned the availability of filled rolls at weekends, which may explain this apparent discrepancy.

According to a sign seen outside in August 2011, there's a trivia quiz every Tuesday from 8:30pm.

Accessibility: Large step at the front entrance; smaller step at the side one. Once you're in, it's step-free to the bar, seating area, toilets, and beer garden.