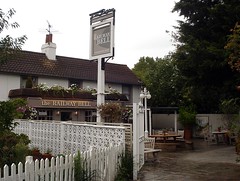 Inside, it's divided into a main bar and a side bar, though passage between them is possible at both front and back. The side bar can be booked. The floor is exposed floorboards, and the ceiling is quite low. Dark wood tables contrast with dove-grey walls and pale green upholstered banquettes. The pub is tucked away off the road, and there's plenty of outdoor seating at the front photo.

Kake first visited on a Thursday evening in September 2009. Music was playing (Beatles etc), and there were a fair few people in, though I had no problem finding somewhere to sit. On another visit on a Tuesday lunchtime in September 2011, there were half a dozen people in, and plenty of conversation going on over the sound of quiet music.

According to the menu as of September 2011, the real ales change weekly. There's a board behind the bar listing the ales that are coming next. In September 2009, the ales available were Twickenham Naked Ladies, Brakspear Bitter (£3/pint), and Courage Best; two years later in September 2011, the Brakspear and Courage Best were still on, joined by Skinner's Betty Stogs (£1.75/half) and Sharp's Cornish Coaster. The Betty Stogs was fine, if served a little colder than Kake would have preferred.

According to a sign in the pub seen in September 2011, food is served noon-2:30pm and 6pm-8:30pm Mon-Fri, noon-7pm Sat, and until the roasts have sold out on Sundays. Also in September 2011, Kake tried out the lunch menu photo, choosing the "hand carved honey roast ham" sandwich on wholemeal bread (£4) photo. It was lovely — simple food done well. The ham was hand-carved, the bread had a good crust and crumb, the mustard was just right, and the salad was fresh.

Quiz night is the last Wednesday of the month (except August), according to the menu as of September 2011.

Accessibility: No steps to get in, and it's step-free to the bar, seating area, and ladies' (gents' not checked).