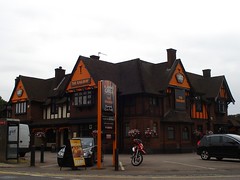 Note: It's been rebranded at least once since our most recent visit (when it was part of the Flaming Grill sub-brand) and hence some or all of the details below may be out of date. Certainly the exterior is now much less orange than the picture on this page.

It's fairly big inside, with a few different areas: a pool room with high stool seating, a dining area, and a regular bar area. There are plenty of TV screens, though it's big enough that you can get away from these. There are also tables outside, under parasols.

Ewan and Jo visited on a Saturday in August 2007, shortly after its reopening following a fire. The interior was tastefully decorated in a bland modern style, very far from unpleasant. Ales on offer were London Pride, Bombardier and Pedigree, as well as the standard range of lagers (including Becks Vier and Staropramen). The chips we ordered were tasty and chunky, though there weren't too many of them.

Kake visited again on a Tuesday lunchtime in July 2013, by which point it was branded as a "Flaming Grill" pub. The interior decor was now themed around orange, red, and purple, presumably to echo the "Flaming" part of the brand. There was only one real ale available (London Pride), though another handpump was marked for White Horse Village Idiot "coming soon". A pint of lime and soda was an impressively-cheap 30p. Music was playing, not too loud, and the flatscreens were showing Sky Sports News with subtitles and the sound off. There were a few people already in when I arrived around 12:30pm, some having lunch. Service was very friendly.

According to signs seen in July 2013, quiz night is Thursday from 9pm and there's live music on Saturdays. They have free wifi via The Cloud (and in July 2013, Kake's existing free account worked fine).

Ewan's verdict: Probably your safest bet in this part of town.

Accessibility: A small step to get in, and a somewhat heavy door. No steps to the ladies', didn't check the gents'. There's a fairly large car park.