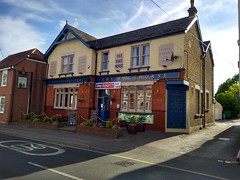 Kake and bob visited on a Monday evening in August 2011. In contrast to the other Carshalton and Wallington pubs we'd visited the same afternoon/evening, the Racehorse was very quiet, with only one or two other customers; it remained quiet throughout our visit (roughly 8pm-9pm). Cheesy music was playing on the radio.

On a previous visit by bob in February 2008, Moorhouse Pendle Witch's Brew was £2.85/pint.

Food is served at some point, but as of August 2011 not on Monday evenings.

Accessibility: A step to get in. There is a car park.