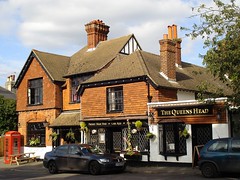 Entry is into a fairly narrow bar area, with the bar itself to the right, and a door to one side leading to the "Suhaili bar", now used as a restaurant. Opening out to the left is a seating area with a hardwood floor, velour wallpaper, sofas and tall-backed armchairs, a dartboard, a flatscreen (switched off on our September 2012 visit), and some nice stained glass photo. There's a patio garden with picnic benches out the back.

There were no other customers in when I arrived a little before 5pm, in contrast to the George and Dragon around the corner, though one did arrive before I left an hour later. Music was playing, mostly from the '90s, not too loud.

According to their website as of September 2012, food is served noon-9pm Mon-Sat and noon-6pm Sun. As well as the regular menu photo, they have a number of specials (which are written up on a board in the restaurant side, but the staff will read them out to you if you want to order from the pub side).

A starter described very succinctly on the menu as "pate" (£4.45) photo turned out to come with a generous quantity of toast, a small saucer of chutney, and a varied salad of tomato, red onion, cucumber, leaves, and multicoloured peppers. The pate itself was also a generous portion, and nicely textured, though a little bland in flavour.

Roast pork belly with mash, broccoli, and peas (£11) photo, from the specials menu, wasn't bad overall. The mash was fine, buttery and smooth yet with a bit of texture too. The broccoli was quite soft but I like it that way. Unfortunately the pork itself was a little tough, and the skin hadn't been scored enough for the fat to escape and crisp up the crackling properly, so the fat layer was a little overwhelming and the crackling was chewy.

Accessibility: A small step and then a larger one to get in.

Kake's verdict: It's a nice little pub, and I'd be willing to give them another chance with the food.