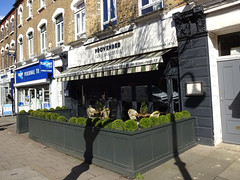 Inside, the decor is smart and clean, and a patio at the front seats 16 at tightly-packed tables under an awning. Napkins are thick cloth, teatowel-style.

Kake has visited twice now, most recently on a Thursday lunchtime in March 2017. On my first visit, on a Friday lunchtime in August 2013, music was playing quietly and there were three other parties in when I arrived around 1pm; by the time I left the patio was full, though there was plenty of space inside.

In August 2013 my starter was breakfast radishes with celeriac remoulade. The radishes photo were lovely and fresh, and the accompanying fleur de sel was exactly the right grain size for radish-dipping. The celeriac remoulade used just the right amount of a tartly but not harshly vinegary mayonnaise.

My main course was whiting fillet served with brown shrimp and crushed potatoes. The whiting photo was disappointing. The skin was left on, but was chewy rather than crisp, and the flesh was overcooked to the point of going hard on one edge. I suspect there may have been timing issues, with the dish being finished too soon and left to sit under a heat lamp. The crushed potatoes were very buttery — more so than I would really have liked — but the shrimp interspersed with them gave a bright briny note that I quite enjoyed, and the fresh herbs and coriander seed in the sauce vierge helped the butteriness from becoming overwhelming.

In March 2017 I started with smoked prawns served with aioli and lemon photo. The prawns had just the right amount of smokiness; present but not overwhelming. The aioli was almost superfluous, though it was nice for dipping the accompanying (crisp and fresh) lettuce.

This time my main course was twice-baked cheese souffle with green salad photo. This was nicely light and well-flavoured. The cheese flavour was fairly subtle, but in a good way, and the bitter leaves in the salad gave just the right accompaniment.

Service both times was the type I like; the staff were there as soon as I needed something, but there was no hovering. Tap water arrived in a jug with ice, and was replenished swiftly when near-empty with no need to ask. A 12.5% service charge was added to the bill.

Kake's verdict: I'd come back. Although my fish was under par the first time, they've more than redeemed themselves with everything else.

Child-friendliness: They have a separate children's menu, and at least one high chair (though it's a type with no tray and very little back support).

Accessibility: No steps to get in, or to the patio. There are three steps up and then another three down again to get to the toilets, with no handrails or anything else to hold onto. The cubicles in the ladies' are quite small.