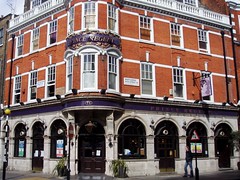 A busy pub on the High Street in Marylebone, part of the Mitchells & Butlers Castle sub-chain.

This is a fairly reliably packed drinking place on the increasingly gentrified High St. The seating inside stretches around both sides of the large bar in the middle of the room, with couches on one side, and small tables on the other. However, on an after-work visit on a Friday evening in March, it was hard to see much of anything from all the people packed in there, and it was much the same on an earlier attempt to visit between Christmas and New Year's (usually a slow time for pubs).

However, the range of drinks available is good (as can be expected from the Mitchells & Butlers unbranded pubs), with a wine list, and premium ciders and lagers (such as Sierra Nevada, Staropramen and Heineken) on draught. They also have four handpulls for ales, with London Pride, St Austell Tribute and Woodfordes Wherry on the March 2009 visit.

There is a narrow smoking area fenced off on the street outside, but staff will quickly usher you back inside should you attempt to stand anywhere that's not within these barriers (presumably there are draconian licensing laws at work in this area).