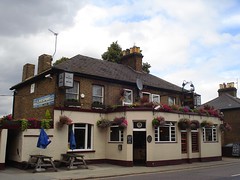 It has two bars with separate entrances, though there's internal access between them. The public side has barer decor, and incorporates a dartboard with a proper oche. It has a flatscreen too. The saloon side is smaller and cosier, seating around 30 people. A conservatory leads off the saloon side, with a pool table in, and further back is a beer garden.

Kake first visited with a friend on a Friday afternoon in February 2008. We sat in the public bar, which seemed to surprise the regulars somewhat, though nobody was really actively unfriendly. The real ales on this visit were Abbot Ale, London Pride, and Tempus Fugit (the guest, at £2.40/pint).

Kake and Sarah visited again on a Thursday afternoon in August 2013. The public side was empty this time; we sat in the saloon side, where there were three other customers. Real ales available were Brains British Summer, Young's Bitter, and Abbot Ale, with Caledonian Golden XPA marked as "coming soon".

On our February 2008 visit there was a pub dog wandering around, but we saw no dogs on our August 2013 visit.

According to a sign outside as of August 2013, food is served noon-8:45pm Mon-Sun. It's fairly standard pub food, but includes a larger-than-average number of vegetarian options, including omelettes and vegetarian shepherd's pie.

According to the menu as of August 2013, quiz night is Tuesday from 9pm.

Accessibility: A small step in at the public side, and a larger one at the saloon side. There's a step between public bar and saloon bar. Toilets are accessed via the saloon side. More steps to the conservatory and beer garden.