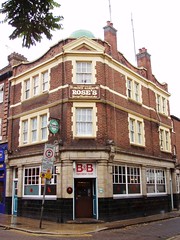 It's a single-room pub, long and narrow, with plenty of natural light from the windows lining the wall opposite the bar. Frosted lower panels on the windows are decorated with stylised roses. A fairly basic wood-panelled bar is given extra interest by some rather nice wrought iron shelving just below the gantry. Old pump clips are displayed behind the bar, showing a good range of styles including milds.

The decor is traditional, with a patterned carpet giving way to blue vinyl around the bar, and upholstered banquette seating near the entrance. There's a dartboard with a wide oche, and several fruit/games machines. There are a couple of flatscreens, and horse racing is shown on Saturdays.

Kake visited on a rainy Monday lunchtime in June 2015. There were two other customers when I arrived a little before 1pm. Music was playing on the jukebox, not too loud. Three of the six handpumps were clipped, for Doom Bar and two others that looked more interesting. A pint of lime and soda was 60p.

They don't do proper food, but they do have filled crusty rolls, which on our visit cost £1.30 each with fillings including liver sausage, cheese, and ham & pickle. Kake tried the liver sausage, which was fine.

Accessibility: A step to get in. No steps to toilets, but access is quite narrow.