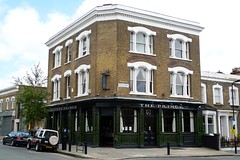 A renovated 'gastropub' just off Church Street in increasingly-posh Stoke Newington, this is a pleasant airy and tastefully decorated pub, popular with families, but slightly soulless in that familiar way with refitted pubs.

On Ewan's visit in September 2007, ales on tap were Greene King IPA and Pride, with the lager option being Adnams Spindrift, Leffe, Hoegaarden, Staropramen and the other usual options. Fairly expensive, given a half of Leffe was £2.80. There was also an extensive food menu (around £10 or more for a main), which wasn't sampled on this visit (though they had a three-course option for £17 including Sunday roast).

There's a function room and bar upstairs available for hire, an outdoors smoking area/beer garden (though no greenery to speak of), and a dining room.

An anonymous visitor (October 2008) comments that the Sunday lunch on their recent visit was palatable though not outstanding, with large portions and delicious gravy and roast potatoes, though the vegetables seemed microwaved and the sausages that one of their party tried were bland; also that the music was overly biased towards the Beatles and the staff could have been friendlier.