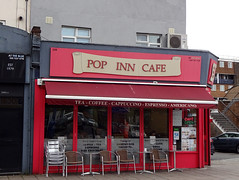 bob visited on a Saturday morning in July 2009. There were a couple of other customers in, and a few more turned up while I was there. The cafe can probably seat 30 people. The tables are mostly ones with fixed seats.

They do a range of set breakfasts including three vegetarian ones. I had the Irish breakfast (£4.50) which consisted of bacon, egg, black pudding, white pudding, beans, fried slice, a slice of bread and tea. The white pudding was really good, and the black pudding was pretty good too, although I would have preferred it to be slightly more crispy. The egg yolk was still runny.