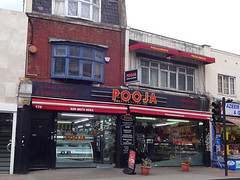 An Indian sweet shop on Upper Tooting Road in Tooting. It is one of a small chain — they have a branch in Kingsbury, and another in Cardiff. This is the original one.

It says everything is 100% vegetarian and egg free. According to its website, it does eggless cakes, but they all contain cream so are not vegan.

secretlondon popped in one evening after work in March 2016. There are two doors with two separate queues. The queue on the left is for chaat and the one on the right for sweets and savouries. The outside of the shop has the left side branded as Shireen Mahal and my chaat came in a bag with that name on, which might indicate it is a separate business although they are one big shop inside. There is a fridge in the middle selling bottles of almond and pistachio milk, and I think ras malai.

They did three sizes of mixed sweet boxes — I got the middle one for £5. When I got it home it weighed about 600g. I rather liked these — they were not as dry at the ones from Ambala in Tooting and was a more interesting selection. It was also much busier, which I take to be a good sign.

secretlondon visited again in April 2016 to try some of their savouries. They have a chaat station, with Indian snack/street food (menu). The chaat ranged in price from £2.50 to £4.00. I had dahi puri for £2.50. It came cold and disassembled — you're meant to assemble it at home. It was about 7 puris, a bag of cooked chickpeas and potato, and a large tub of yoghurt with added spice. I found it impossible to assemble and ended up eating it all separately. They do samosas (£1 for 4) which were nice. They do parathas but only at breakfast time.