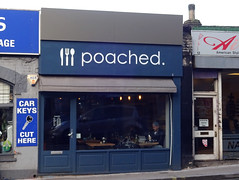 Kake has visited twice now, most recently in February 2020. Both times were on weekday mornings, arriving around 8:30am. There were three or four other sit-in customers both times, with several others in and out for takeaway coffees, and ambient music was playing, not too loud.

In March 2018 I had the Spanish breakfast (£8.40) photo. Poached eggs had properly runny yolks, but the whites were also a little runny in places, and one of them had taken on water which gushed out onto the plate when I cut into it. The figs and grapes were a little under-ripe, and some of the grilled courgettes were a little undercooked. The bread was good, and the crushed tomatoes on top were very nicely seasoned, but I did wish there had been more than one slice of it. The ham was good quality, and a generous serving.

In February 2020 I chose potato waffles with fried eggs and serrano ham (£7.20) photo. The waffles were nicely crispy. The ham was a little tough, but the eggs were very well executed, with runny yolks and crispy-round-the-edges whites. It all went together pretty well.

Earl Grey tea (£2.70 both times) was made with a Teapigs bag in a decent-sized but rather drippy teapot. The cup was pre-heated.

Service was friendly and welcoming, and a carafe of mint-containing tap water was placed on the table as I sat down. No service charge was added, and I couldn't see anywhere obvious to leave a tip.

They have WiFi (ask staff for the network name and password), and a couple of plug sockets. I wasn't the only person using a laptop.

Accessibility: A step to get in. No steps to the toilet, though it's a small space so a bit of a squeeze.